Roman Reigns: The Side Effect of Overcoming Cancer 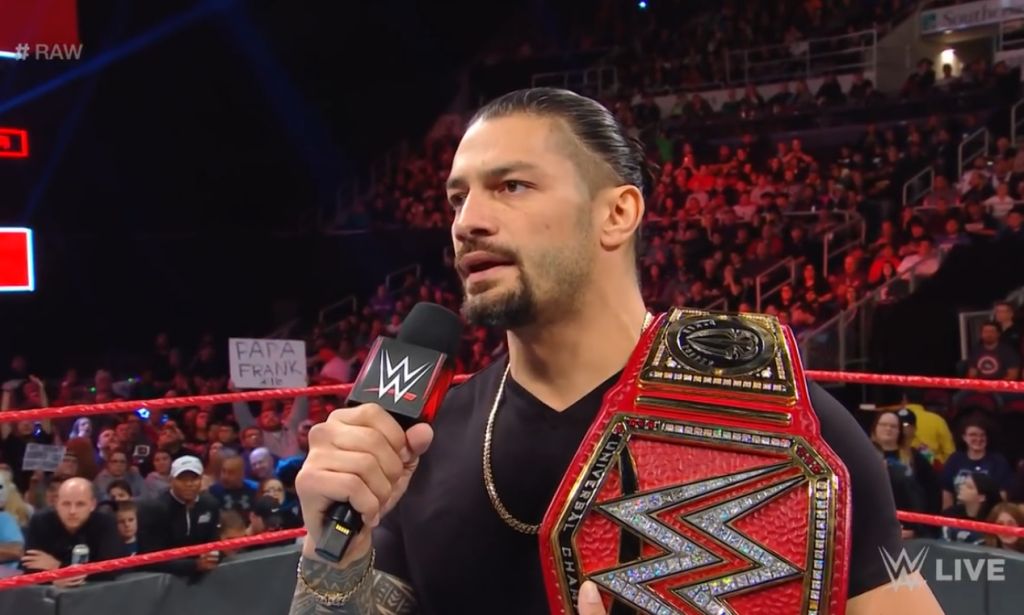 Sometimes the wrestling industry can become very, very real. This happened last Monday night, October 22, during the opening of WWE’s Monday Night Raw. The current Universal Champion, Roman Reigns relinquished his title after admitting in a heartfelt speech that he is battling leukemia. He’s had this disease since he was 22, though it was in remission until now. There were tears in crowd, tears in Roman’s eyes, and tears in the eyes of his Shield brothers, Dean Ambrose and Seth Rollins, when they came out to join him on the ramp after the speech. This is a truly horrible story and the thoughts and well-wishes of all of us at whoASKD are with him.

One way I think we can honour his current challenge is for us to look back over his career so far, and the controversial aspects of it. After all, Roman is one of those wrestlers who occupies the unintentional role of a face (good guy) who is routinely booed by half or more of the audience. The only person who ever got a similar reaction I can recall is John Cena (and maybe these days, Charlotte Flair). But why is this? Why do some fans hate him so much that when Roman announced he was relinquishing the championship, there were still a smattering of cheers mixed into the supportive boos and chants of “No! No! No!”. It took some people in the crowd a few moments to realize Roman was being serious about his leukemia and stop booing him.

On the surface, it seems like such an odd reaction if you’re a casual fan turning on Raw for the first time in a while. After all, Roman Reigns doesn’t seem like a bad person. Roman (real name Leati Joseph Anoa’i, or just “Joe” as he said on Monday) comes from a long line of professional wrestlers, being part of the Samoan Anoaʻi family. His father was Sika, who was one half of the Wild Samoans tag team. His family includes wrestlers like Umaga, the Usos, Rikishi, Yokozuna and, most famously, Dwayne “The Rock” Johnson. Roman is a devoted husband, marrying his longtime girlfriend, Galina Joelle Becker, in 2014. They’d been together since they both attended Georgia Tech in the early 2000s. He’s a father of three, something that has been mentioned on WWE TV often enough. In June 2014, he even appeared with his daughter in an ad that was part of the Ad Council’s “take time to be a dad campaign”.

On top of his family man appeal, he’s good-looking, judging by the reactions of the women in the crowd. He’s a decent in-ring wrestler who can tell a solid story in the ring, and has put on some excellent top-bill matches. His Sept. 24, 2017 match with John Cena at No Mercy comes to mind, a match that earned 4.25 stars from Dave Meltzer. Or his 4.5 star match against Seth Rollins at Money in the Bank 2016. The list goes on. Not only can he wrestle well enough, but his in-ring character is a tough guy, one that fights for what he believes in, and stands up for his friends. However, there are other current wrestlers who do the same thing and are not soundly booed by half the audience whenever they make their way to the ring. AJ Styles and Daniel Bryan immediately come to mind.

So Why The Hate?
This leaves us with the big question: Why? Why do so many people boo Roman Reigns and cheer people like AJ Styles and Daniel Bryan? First, let’s look at who’s booing him. It’s almost entirely male voices you can hear when the boos start, counterbalanced by the cheers from the women and children. Who are these men? You could simply say they are jealous of a guy like Roman and his appeal to women, but it’s not that, at least not at its core. A good segment of the male wrestling audience are devoted fans, and with social media, podcasts, and instant-access news, those fans are more knowledge now than ever about how the wrestling industry works. There has been substantial online criticism of Roman Reigns ever since he became a singles star on the main roster in 2014. But why? Let’s take a quick look at some of the criticisms.

Some fans have argued that he was pushed ahead of Daniel Bryan when Bryan was red-hot in 2014. Many fans pointed out that Roman’s promos seemed robotic, unnatural, with lines no one would ever say in real life (for wrestling fans reading this – remember “Sufferin’ Succotash”? “Tater Tots”? The Jack and the Beanstalk story?). He might have a character that should be cheered, but he’s done little in his promos to actually establish a connection with the fans. His catchphrases, and choreographed signature moves make him seem less human and more like a Saturday morning cartoon character for the kids, one that mom will be right there watching too. And let’s face it, Michael Cole shouting “The Big Dawg!” what seems like every 10 seconds during a Roman Reigns match definitely hasn’t helped. You also have the fans who note he’s a WWE corporate creation from the beginning, never having wrestled anywhere but the WWE.

But what does all this criticism have in common? It has almost nothing to do with Roman Reigns and everything to do with Corporate WWE direction. After all, Roman doesn’t write the promos he delivers in the ring. The WWE writers do that. WWE officials also do the writing for the show itself. Roman doesn’t decide who he’s going to defeat every week or what his stories will be. That’s up to the writers. So when someone boos Roman Reigns for defeating Daniel Bryan, they’re really booing the writers. They’re also booing because they don’t like the idea of a wrestler like Daniel Bryan, who spent years toiling away in the independent wrestling scene before coming to the WWE, who is one of the very best technical wrestlers to ever wrestle, being defeated by a limited-moveset, WWE corporate creation like Roman Reigns. It feels to them like WWE is trying to cram its own vision of what wrestling should be down the throats of their most hardcore fans.

And that’s the point. WWE writing can be terrible, at least on the main shows. And I think this is largely due to the influence of Vince McMahon, who has become entirely out of touch with what the modern fans want in their wrestling. The hardcore fans don’t want to see the same old tropes and gimmicks. They want to see the WWE build up new stars, properly, with actual attention to story and detail. Witness how well the WWE minor league, NXT, is being written (If you didn’t watch the Tommaso Ciampa and Johnny Gargano feud over the past two years on NXT, you seriously missed out on some of the best wrestling storytelling in the last decade or more). However, NXT is a show that Vince has far less control over, with his son-in-law Triple H, being the one in charge. So there is hope for the future. However, for now we’re stuck with sometimes-terrible writing. And since the fans can’t boo the writers, they need a scapegoat. And since 2014, that scapegoat has been Roman Reigns. 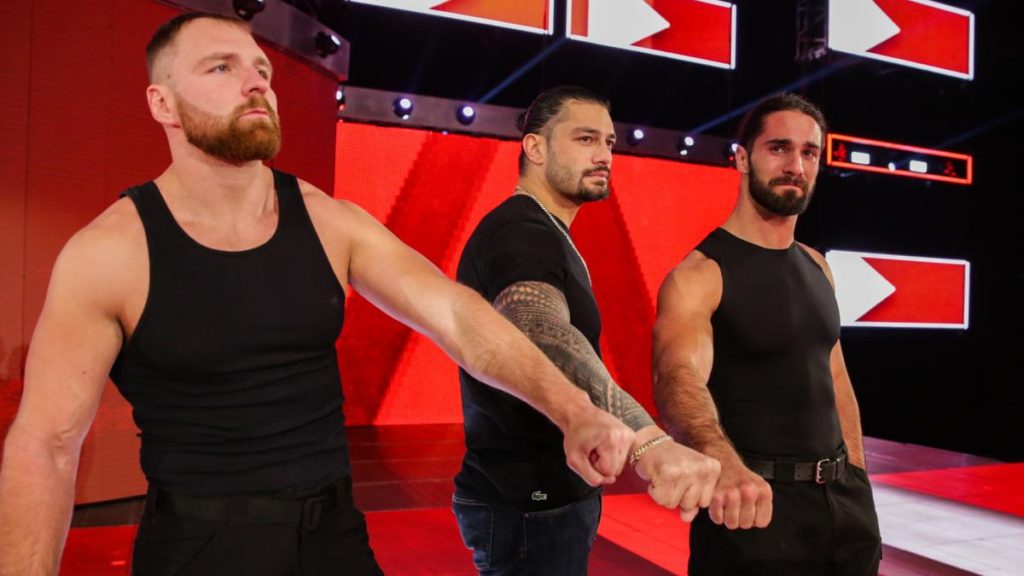 But What Now?
But what happens when the scapegoat suddenly announces that he has leukemia? When real life suddenly takes over and no one in their right mind should or would boo the man? What it means is that it’s time for the booing to stop, and to be honest, I doubt I even need to say that. We’ve been given a real life story of courage and struggle and overcoming a horrific disease like cancer. When, and I mean when, Roman returns, I can imagine him getting one of the loudest ovations in a long time. And I’ll want to see him win, and overcome. I suspect we all will. Let’s hope WWE writers know how little they’ll have to do to make Roman’s return truly spectacular.

I’ll leave you all with this thought. I found it very interesting that no matter how much Roman Reigns was booed, no matter how much sympathy the WWE writers tried to generate for him, not once did they ever mention that he battled leukemia at age 22 and was in remission. In fact, according to Triple H, who recently appeared on New York’s Elvis Duran Show:

“This is something that very few people know about this he and I have spoken about this. This is something he did not want to put out there until he had reached a certain point in time in his career because he didn’t want people to feel like he was being pitied or given things for a certain reason. He wanted to be able to come out at the end and be like ‘Look, I dealt with this the whole time, you can do anything. This is not an end sentence, you know’.”

And that’s the thing. Roman is not only portraying a stand up guy who faces up to challenges and tries to overcome all the obstacles in his path while still keeping his honour, he is that guy in real life. The best wrestling characters are merely larger than life versions of the actual person, and this is Roman Reigns. He’s a family man, a fighter, a guy who takes the good and the bad without complaining, without looking for sympathy or adulation. And now, when he overcomes his leukemia again and returns to the WWE, he will have finally overcome his biggest in-ring challenge too: WWE booking. I’m willing to bet that no one will boo Roman Reigns ever again for simply being Roman Reigns, for being the scapegoat of WWE writing. I know I won’t be. Get well soon, Roman. I can’t wait to cheer you on. Believe that.