The State of Marvel Comics Addendum: The Empire Strikes Back 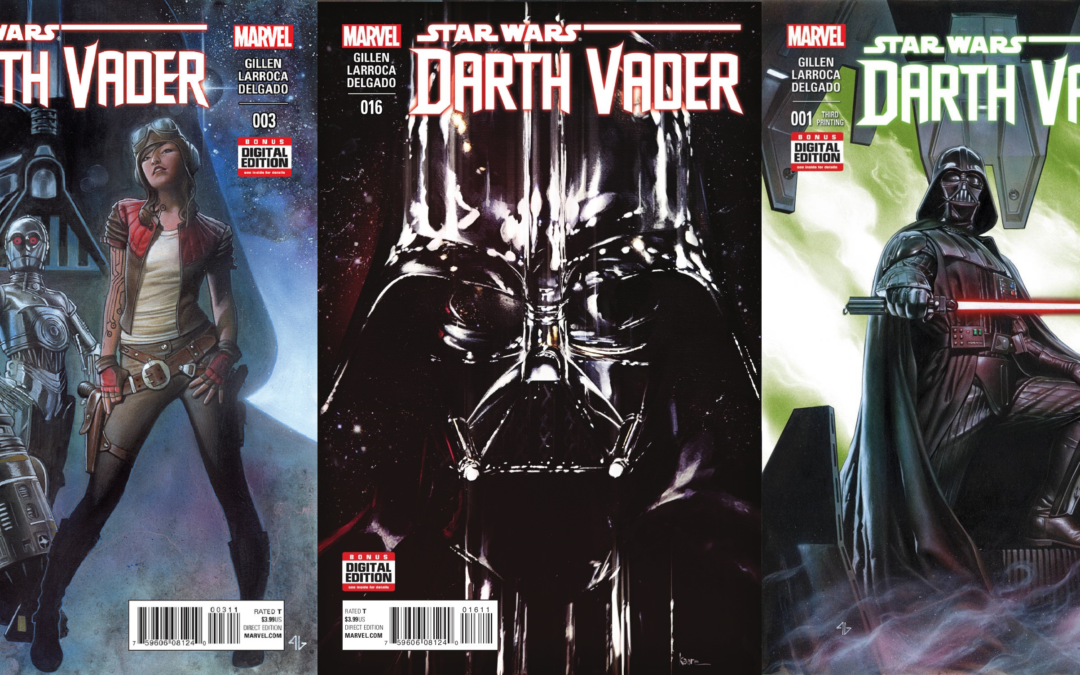 In case you missed it, this week the Sidekicks released a two-part podcast on the state of Marvel comics. It was in depth, informative and interesting. And it also got me thinking. Arf (Arefin Siddique, the Sidekick who puts the AS in WhoASKD – I hear his middle name is Salacious) discussed Marvel comics declining sales figures, confusing releases, and what Marvel could do to improve themselves. However, he left out one very important part of the Marvel lineup in his discussions – the Star Wars comics series. So what I want to talk about here is first, how well the Marvel Star Wars comics do in terms of business for Marvel, and secondly, why the Vader comics have been so great from my point of view, focusing in particular on the 2015-16 limited series..

I Find Your Lack of Faith Disturbing
For those of you who don’t know, in 2009, Disney purchased Marvel entertainment for $4 billion. And then in 2012, Disney acquired Lucasfilm for another $4 billion. This trinity of companies proved to be an amazing decision for fans of Star Wars comics – the same company now owned Star Wars and one of the two superpowers of the comic industry! And not long after, Disney used this empire to begin publishing Star Wars comics.

In January 2015, issue 1 of the new Star Wars series came out and, according to IGN, sold nearly 1 million copies, though this was largely due to a number of variant covers. After that initial hit, the book averaged around 149,000 issues sold per month over the first year. Short duration series featuring main characters like Vader, Leia, Chewbacca, and Lando all sold very well, and debuted between 150,000 and 250,000 in sales, depending on the series.

Of course, that was all during the Star Wars hype period of 2015-17 before the release of the wrongly-maligned Last Jedi. So how did Marvel’s Star Wars comics fare in 2018? They weren’t at the level of 2015-16 but they are still faring very well, with the main Star Wars series and Vader comics averaging around 50,000 a month. This puts them both in the top 20 most months. In addition, 5 or more Star Wars series were in the top 100 in sales every month in 2018, and there aren’t really more Star Wars series than that! 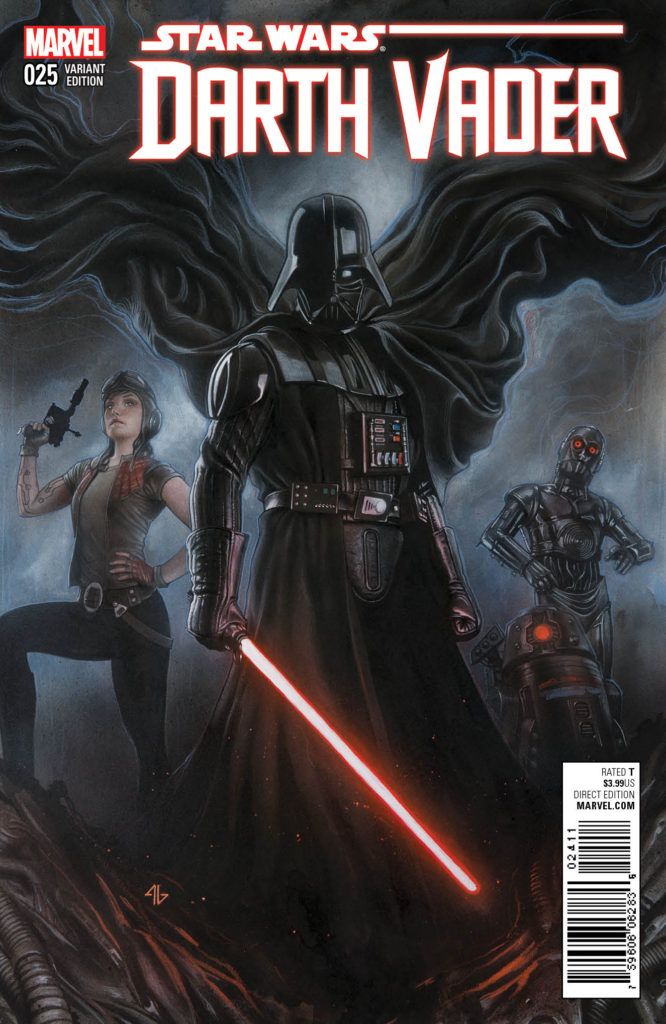 Impressive…. Most Impressive
So Marvel Star Wars comics sell well, all things considered. But why? Well, allow me to speculate for a bit. First, I think there’s always been a strong core Star Wars fan base that will consume just about all things Star Wars. Look at the general success of the now-defunct Expanded Universe, success that happened during times when there were no movies even being released or thought of. Us Star Wars fans have always been out there, and we’ll buy your comics and books if you release them.

Secondly, there has been a ton of hype around Star Wars in the last few years that has fueled renewed interest in consuming Star Wars product, from movies, to collectibles, to books, to comics. People have simply demanded more Star Wars until this year.

Finally, Marvel also brought in some big name writers for the comics, like Jason Aaron and Kieron Gillen. Gillen wrote the first Vader run, and even when he announced he was taking a break from Marvel comics in July 2015, he continued to write the limited Darth Vader series. (He also started the ongoing Doctor Aphra series, and then took over the Star Wars title series in 2017.) What was interesting were Gillen’s own words when he announced his break from Marvel on Tumblr: “That writing Darth Vader was so freeing made me suspect that even if my schedule hadn’t demanded it, I’d be better taking a step away from the MU and superheroes for a bit to recharge.” So it wasn’t Marvel that Gillen wanted to leave, just the superhero side. Writing the Vader books was “freeing”.

And this comment begs the question – why would writing for the superhero side cause burnout while writing for the Star Wars books was freeing? That’s a very good question, and honestly one I can’t answer. I’m no expert on Marvel corporate culture, or how they split up the various departments. All I know is that one of the real highlights in the Marvel releases in the last few years to me has been the Vader comic series, and perhaps bringing a writer like Gillan to an environment more suited to him made the series that much better. 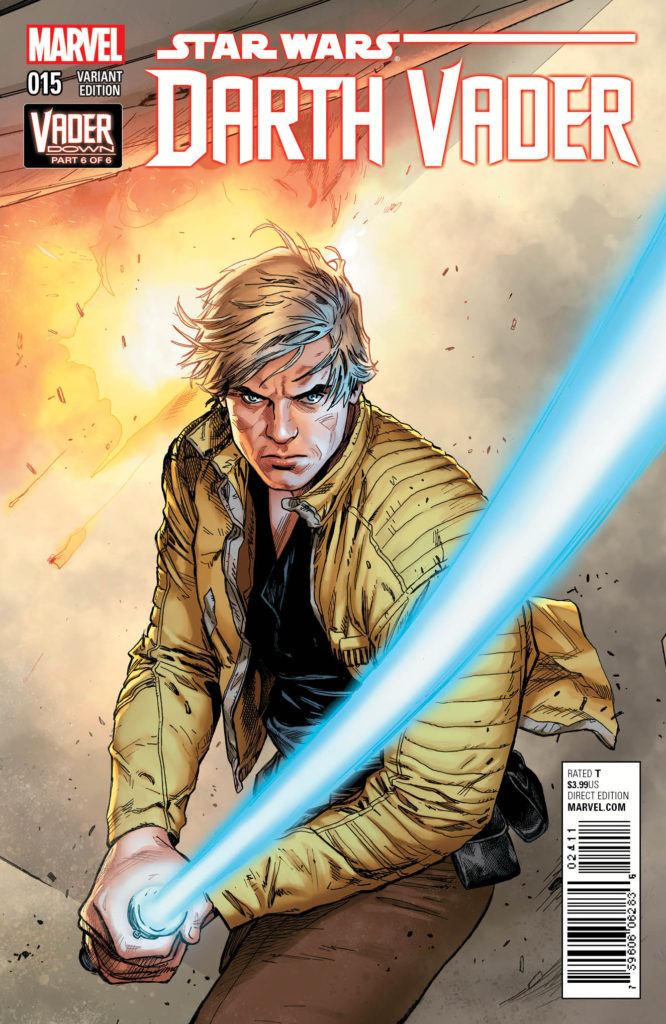 Give Yourself to the Dark Side
The Darth Vader comics are actually two limited series, and are considered canon in the Star Wars universe. Today, I’m only going to talk about the first, the Gillen series. I’m going to save the second for a full review after the last issue comes out in December this year.

The first limited series was comprised of 25 issues, and ran from February 2015 until October 2016. It was written by Kieron Gillen, with art by Salvador Larroca. The story takes place between Star Wars: Episode IV A New Hope and Star Wars: Episode V The Empire Strikes Back.

One thing I love about this series is it does a masterful job of exploring Darth Vader’s character, what makes him tick, his relationship with the Emperor, his rivals for the Emperor’s attention, and his underlings. This is peeking behind the curtain of the Empire at its best, never mind the inner workings of the Sith master-apprentice relationship. We see an often-tormented, often-angry dark lord, rebellion against his master growing throughout the series. This inner look is combined with the powerful force that we all know Vader to be – the Vader we’ve seen slaughtering rebels at the end of Rogue One, the Vader we’ve watched accepting Captain Needa’s apology. There are so many scenes in these comics where Vader is depicted as a serious badass that is almost impossible to defeat. For example, during the Vader Down story, he takes on overwhelming numbers of Rebel forces alone.

The comics also bring in Vader’s relationship with the underworld, especially crime lords like Jabba the Hutt and bounty hunters like Boba Fett. After all, I always found it sort of odd that with a massive starfleet at his disposal, Vader turns to a group of motley bounty hunters in Empire Strikes Back to help him track down the Millennium Falcon. Well, now, having read these comics, I understand much better why Vader would do so.

The new characters are also very interesting, such as Doctor Aphra and her companions. Doctor Aphra is particularly compelling as a fairly complex scoundrel who is essentially a darker female Han Solo who lives her life on a razor’s edge. Working for Vader, she knows that this will likely end in her own death, and yet carries on. The character was so well done that I was more than happy to read Gillen’s ongoing Doctor Aphra series that spun off from these Vader comics.

But what is most gripping about this series is the actual story: it describes Vader’s pursuit of that young, Force-sensitive pilot that blew up the Death Star, and the discovery that this pilot is actually Luke Skywalker, which means the Emperor lied to him about Padme’s death (the actual discovery scene was spectacularly written and drawn). This is Vader’s driving force (pun intended) – his love of his family, even if it is now shrouded in the cloak of the dark side. And it is this driving force that makes every issue so compelling, while also explaining why the opening title crawl of Empire Strikes Back states that Vader is “obsessed with finding young Skywalker” and not “obsessed with finding the Rebel Alliance”.

If you haven’t read these comics, and have even an inkling of love for Vader, or curiosity about what happens between Episodes IV and V, then you really should check this series out. You won’t regret it.