CastleVania is one of those video game franchises that rears its head once every few years, without the fanfare that one is accustomed to with say – the Mario, Halo, or Grand Theft Auto series.  Nonetheless, it endures slowly from generation to generation/platform to platform, amidst the titans of the video-game industry with a hardcore fan base that is always looking for the next CastleVania adventure.

My first foray into CastleVania came with PlayStation’s Symphony of the Night in 1997.  With full disclosure, I will say that I never finished the game. It had amazing level designs and some of the best music ever put in a video game, but it went back on the shelf in favour of a little known game called Final Fantasy 7.

So when Netflix first announced an animated mini series with Warren Ellis as the writer and show runner, (you may know him from his comic book writing credits on The Authority, Hell Blazer and Planetary) it caught my eye and I was curious as to how the series would be handled.

Be warned, the entirety of this review consists of  plot details from both the games and the show. Spoilers ahead, you’ve been warned: 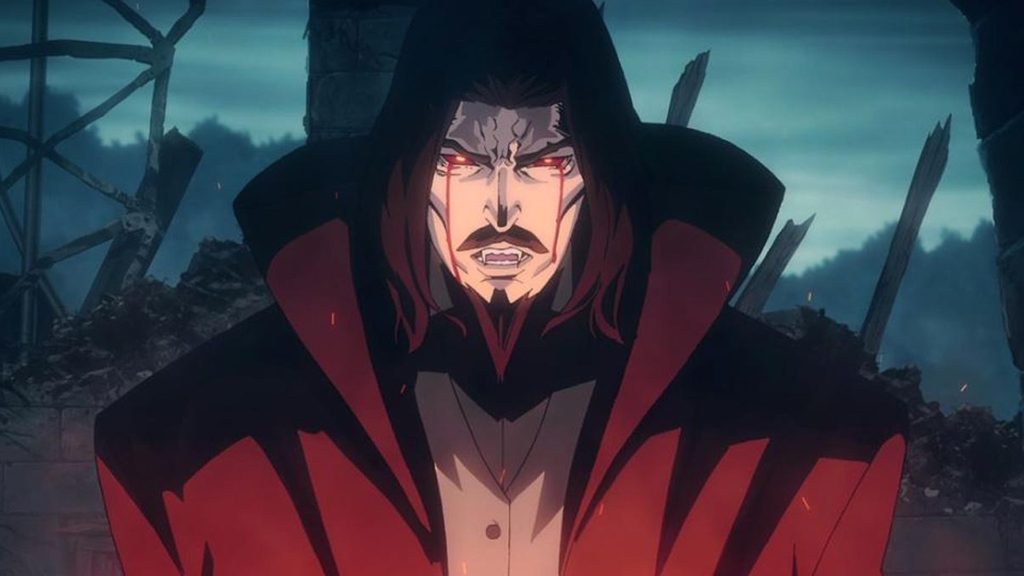 Season 1 landed in July 2017 and comprised of four 22 minute episodes which followed the main plot line of the game, CastleVania 3.  The show begins in the town of Wallachia, Romania in 1455 AD with Lisa – a young doctor who is intrigued by the mysterious Vlad “Dracula” Tepes and seeks him out for scientific knowledge.  The two have instant chemistry (no pun intended) and Dracula eventually marries Lisa.

Fast forward 20 years later and the town Bishop moves to arrest Lisa for providing unorthodox medicine to the locals.  She is found guilty of witchcraft and is burned at the stake. Meanwhile, Dracula, who has been travelling the world to better understand mankind at the request of Lisa comes home to the news of his beloved’s death at the hands of the very people she swore to help.  Seething with rage and loss, Dracula unleashes his full power!  He comes to them in his fiery form at the very spot where his wife was executed gives the town of Wallachia ONE year to leave or face his wrath!  He plans to use this time to gather an army of the night to attack.

A year passes and Dracula appears during a church celebration and finds them commemorating victory over Dracula’s threats.  Astonished that the people did not take his ultimatum seriously he vows to destroy them. Every sundown, Dracula sends a small party of his night army to kill and intimidate the town.  Word reaches Trevor Belmont – the last surviving member of the once prestigious House of Belmont, who are renowned vampire hunters.  The Belmonts have been driven from their home and have no allies left to take on Dracula’s forces. Through Trevor’s adventures, we meet Sypha, a “Speaker” – nomad monks of oral tradition who also delve in magic.  Trevor locates Sypha underneath the city catacombs who went missing while looking for the “sleeping soldier” – a legendary hero believed to be able to defeat Dracula.

Season 1 ends with the reveal of the “sleeping soldier” being none other than Dracula and Lisa’s half vampire, half human son – Adrian Tepes, otherwise known as Alucard.  Alucard believes his father is mad with rage and wants to uphold his mother’s wish of helping humanity. Trevor, Sypha and Alucard form an unlikely partnership to end Dracula and his army.

Season 1 was absolutely fantastic!  Fans of the games will find that Ellis did the games justice when writing the series!  It is brutally gory and is clearly a show geared towards adults and pulls no punches in depicting death. 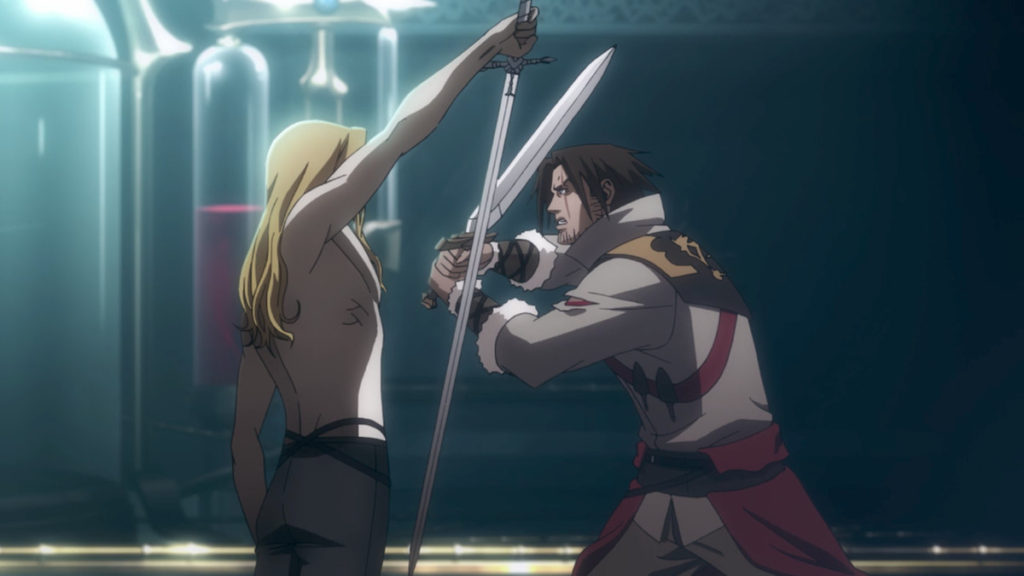 Season 2  just released on October 26, 2018 with eight episodes and introduces us to Dracula’s War Council, including the human Necromancers, Hector and Isaac.  CastleVania fans will recognize both, especially Hector – the protagonist of CastleVania: Curse of Darkness for PS2. Here we see how Hector met Dracula, and the inner workings of the turmoil that surrounds Dracula and his war effort.

Season 2 expands on Dracula’s revenge as we discover he plans to not only wipe out those who executed his wife, but all of humanity!  He uses the Necromancers to re-animate the dead and promotes them as his generals to wage war on their own kind. As the season progresses, we witness Dracula’s plans put into action as Trevor, Sypha and Alucard desperately seek a solution to end his reign.

If you’re looking for a show that revels in fan service, this is it.  This show is a love letter to those who enjoyed the world of CastleVania and the character within it.  Dracula’s castle is shown in all its glory and I really love the design they went with here. We see its rooms and the magic that makes it unique.

One of my favourite moments of the show is when Alucard is shown walking through the castle that he grew up in.  It’s a sombre moment that speaks to the CastleVania lore that Ellis is clearly aware of.

Dracula himself is an enigmatic figure.  The show dances around his villainy and plays with themes of death and family bond.  Not going to spoil it but there is a scene with Dracula and Alucard that is sure to get one misty-eyed.   A lot of CastleVania’s success has to do with the overall production and design.

The voice work is typical of the ‘silent antihero’ you’ve come to expect from Japanese anime anti-heroes.  CastleVania is no exception, but Richard Armitage (Trevor) and James Callis – you may know him as Gaius Baltar from Battlestar Galactica – who plays Alucard both nail their characters.

There is a playful banter between the two characters that is missing from the games and is wonderfully fleshed out in the series.  Sypha also shares a tender moment with Trevor at the Belmont Estate,who allows her to sleep while keeping her protected by his cloak.  It’s a very subtle moment in their quest, but a major one for trust in one another. Their relationship is amazingly restrained and handled by the writing team. 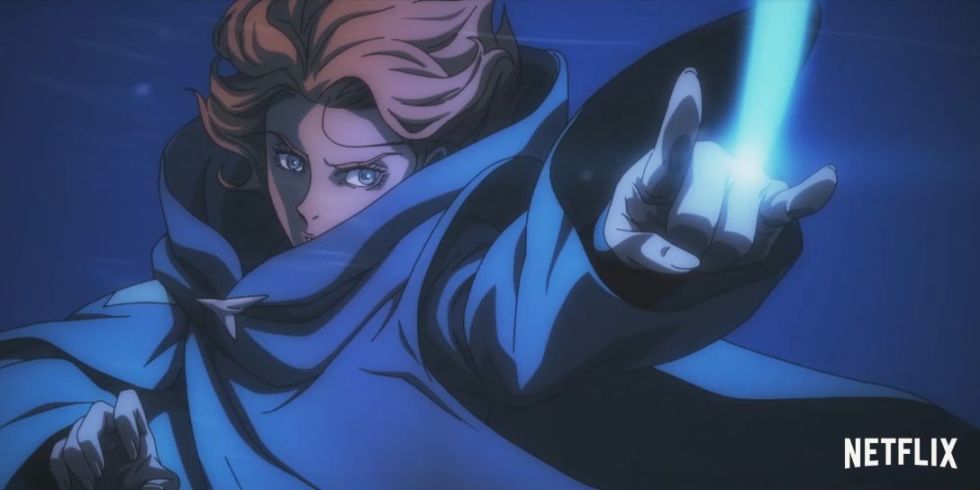 From a technical standpoint, the quality of animation is consistent with game and promo artwork CastleVania fans will know and love.  The world portrayed is colourful, brutal and lush at the same time. It won’t wow you, but it is quality you would expect. The sound design is also admirable.  Dialogue is crisp and is never overpowered by the surround effects. Rear channels are well used with some great panning effects that place you right in the centre of it all.  Trevor’s whip cracks with authority and CastleVania fans will rejoice to know that the Vampire Killer Whip – Morning Star is well represented accompanied by familiar music. The low frequency effects are tamed but really come onto their own in Episode 5 of season two when the Belmont Estate is attacked.  I would have liked to hear more low end in the sound mix throughout the season, especially in battles.

CastleVania seasons 1 and 2 are a testament to good writing and proof that you can take a story from a video game, embrace it, and create a canvas that allows the characters to breathe life into a new medium.  If you know nothing about CastleVania, you will enjoy the story telling, the amazing fight sequences, the conflicts within characters and perhaps come to appreciate the work that went into this series.

And dare I say that CastleVania takes its limited source material and delivers the best example of a video game story EVER put on film.  Highly Recommended! Can’t wait for Season 3. 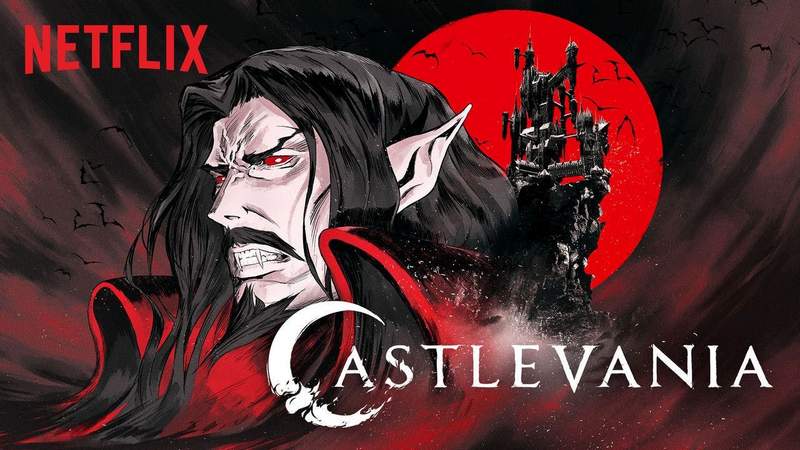 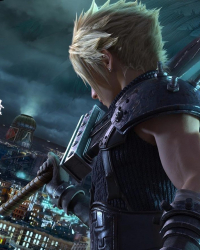 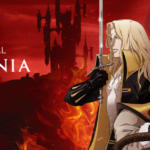