I’m taking a different approach with my article this time in the spirit of this week’s Sidekicks Anonymous podcast – a smorgasbord of topics. And in honour of the surging popularity of Red Dead Redemption II, I’m going to use a format named after my favourite western of all time, The Good, The Bad, and The Ugly. So without further ado, here’s some of my thoughts on things that happened in the past week or so, mostly from the world of professional wrestling. And be warned, there might be spoilers if you haven’t watched this week’s wrestling.

NXT TakeOver WarGames 2 was held last Saturday, Nov. 18 at the Staples Centre in Los Angeles, California. And as usual, NXT delivered a great event. But wait! you say. What’s NXT? For those of you who don’t know, NXT is World Wrestling Entertainment’s developmental division, its minor leagues so to speak. NXT has a one-hour show every Wednesday night on the WWE network, generally pre-taped at Full Sail University in Florida near the WWE’s Performance Centre (where talent is trained). Since 2014, it has also put on four larger two-hour special events every year called TakeOvers, also all broadcast over the WWE Network. These specials generally (but not always) occur on the Saturday before the WWE’s “big four” pay-per-views, Wrestlemania, SummerSlam, Survivor Series and the Royal Rumble.  The NXT roster features a mix of “homegrown” talent (those people who began their careers with WWE) and wrestlers who previously worked for various independent promotions like Ring of Honor, New Japan Pro Wrestling, Progress, and others. A few times a year, some talent will be called up to the main WWE roster, making room for more new wrestlers and bigger opportunities for those who have been in NXT a while.

NXT is also my favourite weekly wrestling show. I vastly prefer it to any WWE main roster show. Main roster is all about selected highlights for me, while NXT I tend to watch everything. Why? It’s more about NXT’s excellent booking and storytelling, combined with the actual quality of the matches, both of which far exceed anything found on the main roster. Stories are given the time and room to grow. Matches are far closer to the “indie style” of wrestling, with fewer slow spots and greater emphasis on in-ring storytelling and amazing moves. I look forward to NXT every week, and especially to the special events.

The developmental aspect of NXT also makes it more entertaining than the main roster. NXT is a show where you can watch some very experienced wrestlers hone their craft as part of their preparation for being on the main roster, while also watching the wrestlers develop their characters before your eyes. Anyone who remembers Alexa Bliss’ fairy princess gimmick or Becky Lynch dancing irish jigs during her matches or Charlotte Flair looking clumsy and awkward in the ring knows what I’m talking about. We’ve watched Patrick Clark develop from a relative nobody with zero personality into the amazing Velveteen Dream. But I digress. This is not an article about the history of NXT or why I love NXT. It’s about what I liked about it this past weekend!

WarGames 2 delivered in spades, as most TakeOvers generally do. It consisted of five matches, and if you haven’t seen it, go find it. Among the highlights:

Also good was Survivor Series, which WWE held last Sunday. I won’t say too much more about it in the good column, but I wanted to acknowledge that it was better than I had expected it to be. Most of the matches were entertaining, even if I still was left wondering about the booking.

Finally, I’m currently reading Thrawn: Alliances by Timothy Zahn, the second of his canonical Thrawn novels in the Star Wars universe. It’s amazing so far. The Emperor makes Thrawn work with Darth Vader on a mission together, and the interaction is very interesting. I can’t help but love a book about my two favourite Star Wars characters. I’ll do a more in-depth look at the book another time. For now, let’s just say the world would be a better place with more Thrawn stories. 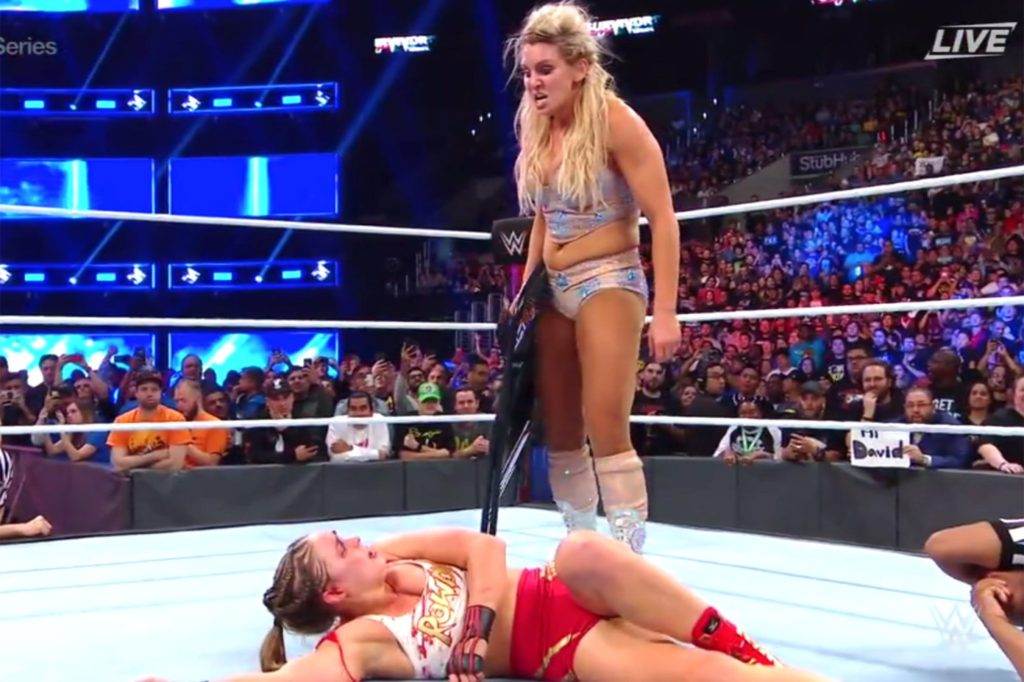 My favourite moment of the weekend happened during the Ronda Rousey vs. Charlotte Flair match at Survivor Series, and it’s what I’ll talk about here. But how can my favourite moment be bad? Because it raises more questions that I find concerning, such as is WWE even capable of booking an actual heel turn anymore? Do they even understand why fans cheer for whom they cheer? The main factor behind fan support seems to be anyone the fans think is deserving of being pushed gets cheered, and those they think are being undeservedly pushed get booed. The heels are not the wrestlers for the most part. The true heel is the terrible WWE booking, and fans with any knowledge of wrestling understand this, and boo accordingly. Until this problem gets solved, what happened Sunday between Rousey and Flair will keep happening. We’ve seen it before with Daniel Bryan, John Cena, Becky Lynch and Roman Reigns. And we saw it again Sunday.

The actual match between Rousey and Flair was very good. One caveat – I am not a Ronda Rousey fan. I didn’t like her when she showed up in WWE. I don’t like how she was suddenly a superstar, although I get it from a WWE marketing standpoint. I don’t like her character. I don’t like her references to Roddy Piper, and I really dislike how strongly she’s been booked. Her promos can be cringe worthy (what the hell was that “Becky is the ultimate millenial” crap from last Monday?) So when I say Rousey had a good match on Sunday, I mean it. She’s learned how to transition a number of her moves very well, and no one can do an armbar like she can. Flair is one of the best in ring now, and almost never has a mediocre, never mind bad match. So they delivered in ring.

But it wasn’t the match itself that was so amazing. It was the end. Flair, frustrated at the way the match was going, suddenly snapped and beat Rousey down with a kendo stick that was under the ring (why WWE keeps kendo sticks under the ring is one of the Great Mysteries of Wrestling). And I mean she beat her down. The marks were obvious. The stick broke. This obviously caused the DQ and Flair lost the match, but the beatdown kept going. Refs tried to hold Flair back, but to no avail. Flair beat them out of the way. She wrapped a chair around Rousey’s head and stomped it. The whole time, Flair had a look of crazed anger in her eyes. The announcers went on and on about how heinous this attack was, that Rousey has never been brutalized like this, that someone needs to stop this atrocity. Flair left Rousey in the ring, beaten, slightly bloodied. Sounds awful, right?

The fans didn’t think so. The arena erupted in cheers when Flair attacked Rousey. They cheered as it went on. They cheered when Flair got the chair. They booed when the refs tried to stop her. They cheered even louder when Flair tossed the refs aside and used the chair. When the attack was over, the fans chanted, “Thank you, Charlotte!” And when Rousey finally struggled to her feet again, Flair long gone, the fans chanted “You deserve it!” And it seemed to legitimately anger Rousey. I was one of those who felt exactly like those fans did. It was an awesome moment for Charlotte Flair, with so many possibilities for her character going forward. Does this align her with Becky Lynch? Does this lead to an eventual Wrestlemania rematch with Rousey, with some very high stakes now?

But it was clear to me from the booking that WWE was trying to generate sympathy for Rousey with this attack, to turn her into the ultimate babyface. They failed miserably. Why? I can only speculate, but I think it’s because of all the factors I mentioned before: Rousey came out of nowhere and was made an instant star because of fame she received outside the WWE. She never wrestled in NXT. She didn’t really pay her dues. She’s had the top spot handed to her, and, let’s face it, she’s not very good on the mic yet. But Charlotte Flair? She’s delivered quality match after quality match. She spent her time in NXT, developed, learned her character, and is now one of the best women in the ring today. And she plays a heel very, very well. The fans will cheer her against a Ronda Rousey every time. Flair deserves top billing in the fans’ eyes. Rousey? Not so much. Maybe one day, but she’s done little to earn it yet. 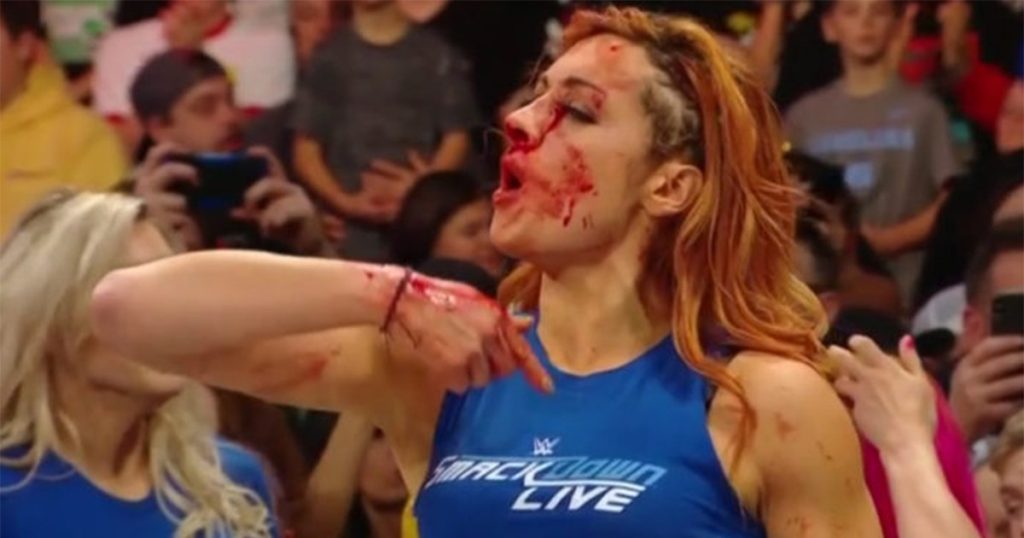 One brief note here. What was ugly last week was that fist Nia Jax unloaded a haymaker on Becky Lynch during the SmackDown women’s attack on the Raw women on Nov. 12. The result gave Becky the look of a bloodied Irish warrior queen for the rest of the fight, and it also removed Becky from Survivor Series with a legit concussion. Wrestling is about the ability to trust the people you’re working with not to injure you. Now accidents happen, and injuries happen, but around Nia they happen all too often, pointing towards how fast she was rushed to the main roster. GoodGuyRev posted an interesting thread on Reddit a few days ago highlighting various injuries and near misses Nia has been involved in, including:

Add Becky injury to this, and it’s an ugly list. Nia needs more development, and perhaps it’s time WWE sent her back down to NXT for a while to learn some more of the basics. Message to Vince McMahon – just because they’re big and related to the Rock doesn’t mean they should be on the main roster.