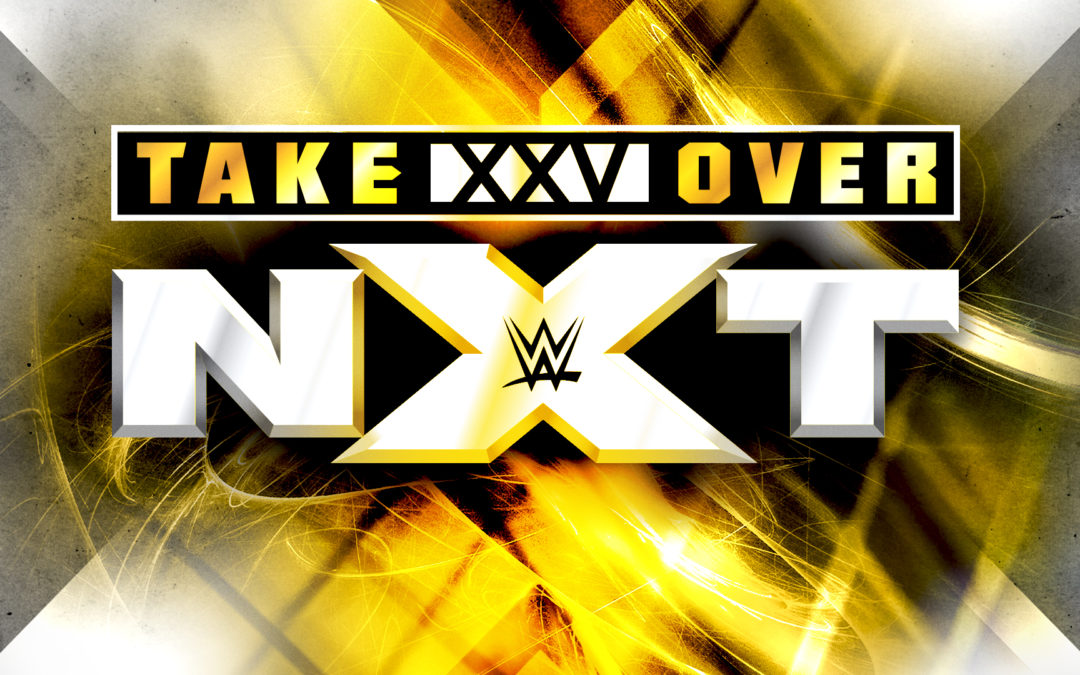 (Warning: This article contains spoilers for NXT TakeOver XXV) It was hard for me to believe that we were already at NXT TakeOver XXV, and even harder for me to believe that NXT as a brand with its own television show will be celebrating 9 years this month (I’m not counting that weird reality show that was billed as NXT from 2010-2012). It really feels like just yesterday when I started watching what has become the best show WWE now produces. It has held that title for years now, and given the direction Raw and SmackDown are going, it’s in no danger of giving up its crown anytime soon. TakeOver XXV was another prime example of continued NXT dominance.

TakeOver XXV came to us from Bridgeport, Connecticut at the Webster Bank Arena. I was not as hyped for this show as I have been for others in the past, and coming off such a wrestling high from watching the superlative AEW event Double or Nothing last weekend (listen to our review on Sidekicks Anonymous episode 39), I might even have been suffering from a little wrestling fatigue. But it didn’t take long into this event before the cobwebs cleared and I was right into what turned out to be another excellent NXT show.

The card opened with Matt Riddle vs. Roderick Strong. I’m not a huge Riddle fan, but that’s because of his gimmick, not his wrestling talent. Everytime I hear the opening “Bro” of his theme music, I kinda want to vomit. But this guy is great in the ring, and in a match with Roderick Strong, they didn’t disappoint. Strong spent most of the match working over Riddle’s back, and if I had to nitpick for a moment, I think Riddle needs to learn to sell better. There were a few moves he did where I was left wondering how a guy whose back is supposedly hurting that much can lift and throw Strong around. This became glaring in the end of the match when Riddle’s bro-mission finisher failed because of his hurt back, but then somehow he was immediately able to use the Bro-derrick slam to pin Strong, a move that clearly requires back strength. Lack of selling aside, this was still a solid match, with lots of hard hitting moves. I enjoyed it for the most part, though I was really hoping Strong would pick up the win. I suppose now Riddle can move onto the main title picture while Strong does…what? Argue with his team some more? I just don’t know. Anyway, I’d give the match a solid 7 out of 10. 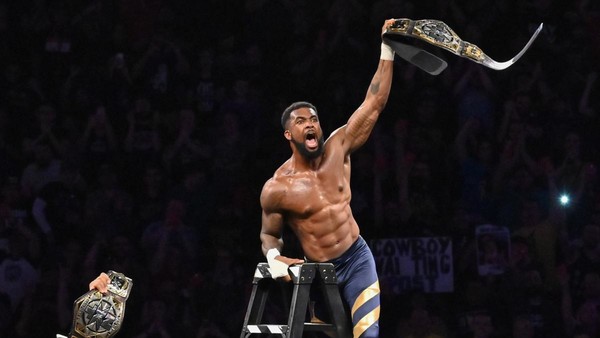 The next match on the card was a fatal four way ladder match for the vacant NXT tag team championship. The War Raiders/Viking Experience/Viking Raiders (Vince, just stop. Please. Just stop) relinquished the titles now that they’re on Raw, leading to this match. Facing off were the Street Profits (Angelo Dawkins & Montez Ford) vs. the Forgotten Sons (Wesley Blake & Steve Cutler) vs. Oney Lorcan & Danny Burch vs. the Undisputed Era (Kyle O’Reilly & Bobby Fish). The crowd was solidly behind the Street Profits and Undisputed Era, largely indifferent to Lorcan and Burch, and actively booed the Forgotten Sons whenever they got close to the belts. This match was incredible. It’s very hard for me to describe here. You really just need to see it. All teams got great moments and sequences in the match. Of note was the number of shots Kyle O’Reilly took. At some point, his back got cut open. Another good moment came when Jackson Ryker, the third member of the Forgotten Sons, came out and beat down everyone while the crowd chanted “we forgot you” at him. The teams responded by allying together and completely destroying him. The true highlight of the match came in the finish though when Blake seemed to be alone on the ladder about to get the titles, when suddenly Ford sprang up to the apron, leapt to the top rope and somehow jumped from the top rope right onto the ladder. It was an amazing feat of agility! I’m pretty sure Ford is made out of rubber and springs. He managed to knock Blake off the ladder and grab the belts, crowning the Street Profits the new NXT tag team champions. It was everything you’d expect from a fatal four way ladder match. I was thoroughly entertained, and the result was a good one. I’ll be interested to see the Street Profits as tag champs. This match gets an 8/10.

The ladder match was followed by Tyler Breeze making his return to NXT and facing off for the North American title against the champ, Velveteen Dream. The promos between the two of them have been interesting and funny, and it was really good to see Breeze back in a ring having a solid match, something he never gets to do anymore on the main shows. The match itself was good, with lots of good nearfalls. Highlights included Dream taking a selfie with Tyler and the belt on the latter’s phone on the announce table while Breeze was battered down and imobile. Another was an interesting sequence where they both reversed tombstone attempts multiple times. The finish came after Breeze managed to land his supermodel kick, but Dream rolled out of the ring, By the time Breeze got him back in, Dream connected with the Dream Valley Driver and the Purple Rainmaker elbow for the three. It was an entertaining match, though the result was somewhat predictable, given I doubt Breeze is anything more than a momentary guest on NXT. I’d give this match a 7.5/10.

Next up was the women’s title match, featuring Io Shirai against the champ Shayna Baszler. This was a decent match, although I have no particular love of either competitor, so that might have influenced my enjoyment of it. Both women worked hard, and Matt Riddle could take notes from how well they sold their injuries. At one point, Jessamyn Duke and Marina Shaffir tried to interfere to help Baszler, but they were stopped before they got the ring by a kendo stick-wielding Candice Lerae. The end came shortly after with Baszler tapping out Shirai with the kirifuda clutch. What came next, I found truly baffling. After losing clean to the champ, Shirai picks up the kendo stick and proceeds to beat Baszler down, with Lerae cheering her on from ringside. It was a truly heel move, and made Shirai seem like nothing but a sore loser, though the announce team supported it simply as Shirai snapping. After Shirai hit Baszler with a chair-assisted splash off the top rope, she left the champ lying in the ring, retreating with Lerae to the back. I really don’t understand the purpose of this attack. I give this match a 6.5/10. The women worked hard, but I found it hard to care, and that post-match attack was baffling. 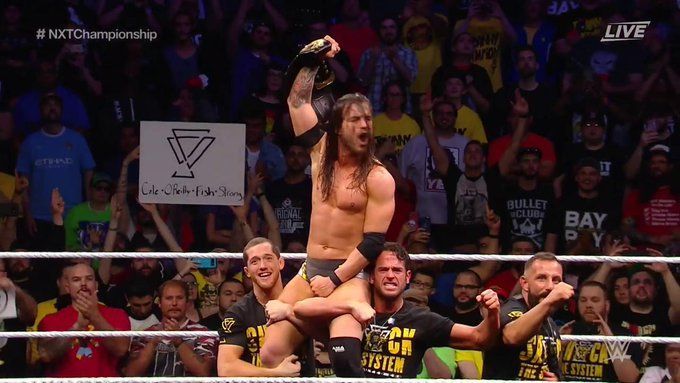 Now at this point, I’m thinking this TakeOver simply hasn’t lived up to the standards of previous shows. It’s been good, and I’ve enjoyed it, but I’m not finding it truly memorable. However, the final match absolutely made the show and catapulted it back into yet another amazing production from NXT. The last match featured Adam Cole of the Undisputed Era against champ Johnny Gargano in a rematch from NXT TakeOver New York. Let me pause for a moment though and discuss Adam Cole’s ring entrance. I usually love it. It’s one of my favourite entrances in NXT and suits him perfectly. But this time I was jarred by wondering why someone was talking over it. Then it dawned on me that Cole was being rapped to the ring by some unknown rapper (turns out he’s Christian rapper Josiah Williams) in what was one of the most terrible things I’ve heard in a long time. I really hope I never see anyone try and rap over the Undisputed Era theme ever again. No one is less hip hop than Adam Cole, and that’s a good thing. Gargano’s entrance was far more normal, with him cosplaying Captain Marvel for this event.

The match itself was outstanding. I can’t say enough good things about it. The story became one of Gargano working over Cole’s arm while Cole worked over Gargano’s leg. The selling was excellent (take note, Riddle). They went back and forth with so many good moves and counters. You really need to see this match to see how good it really was. There were numerous ‘this is awesome’, ‘NXT’ and ‘fight forever’ chants. Adam Cole superkicking Gargano on the floor in the middle of a top rope suicide was incredible. The end came when Cole managed to fight out of the Gargano escape by pounding on Gargano’s knee. The knee wouldn’t allow Gargano to do much more (Riddle? Taking notes yet?) and Cole landed the Panama Sunrise from the second rope followed by the last shot knee for the three count and the NXT Championship. A simply phenomenal match from start to finish, and a definitive answer from NXT to AEW that they would simply not be outdone. Easy 9/10.

So that was NXT TakeOver. We got a new champ with Adam Cole, and new tag team champs with the Street Profits. The show delivered, even if not quite as strongly as some the the TakeOver classics. I look forward to seeing how the card builds now for NXT TakeOver Toronto in August, especially considering that the WhoASKD Sidekicks will be there live!

Follow Me
Latest posts by Bill Cutbush (see all)
0.00