A Fiend, a Club, and a Superhero: My Look Back at Summerslam 2019 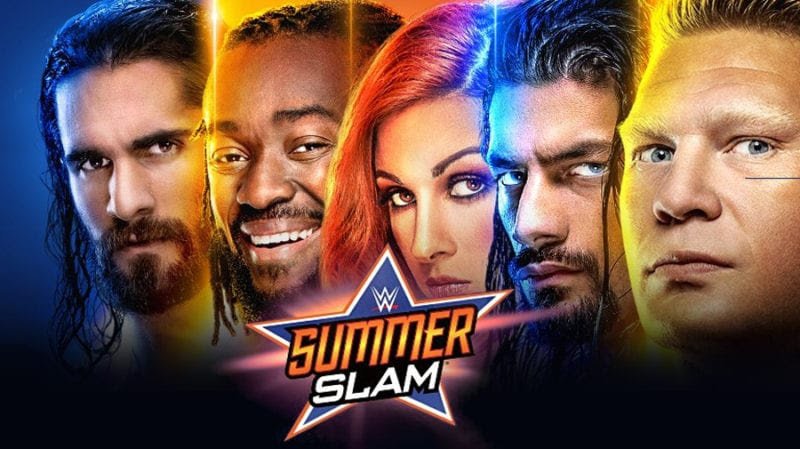 World Wrestling Entertainment brought its annual Summerslam event to Toronto this year, which meant that I was pretty interested in watching it last Sunday. It’s always a little more fun viewing a special event when it’s happening in your own city. It was also the first time I watched any WWE main roster product in quite some time. I stopped watching Raw and Smackdown a while back, although I have kept up on what’s been happening by listening to podcasts that review the shows. Until WWE gets the storylines and internal logic to a point where it finally makes sense, I won’t be tuning in. However, I will still be catching most of the special events, and I’m glad I caught this one. The show was entertaining for the most part. I’m not going to do a blow by blow recap here, nor will I comment on the pre-show since I didn’t see it, but I thought I’d share with you some things I liked, and some things I didn’t from the show.

The Good, or Expect the Unexpected

So the really terrible Kofi and Orton match finishes, thankfully (see below), and I know the Wyatt-Balor match is next. I’ve been looking forward to seeing what they will do with Bray Wyatt’s new character in the ring for a while now, ever since the first Firefly Funhouse. But what happens next exceeded any of my expectations. If you haven’t seen Bray Wyatt’s entrance at Summerslam, you need to go watch it. I’ll even pause my writing a moment so you can go do that. ….. You’ve seen it now? Okay, good. Then you’ll agree with me when I say that was one of the most awesome entrances in wrestling in the last decade, maybe longer. The music was perfect, and the theatrics were amazing. The lantern Bray carried was so creepy it elicited comments from the people that I was watching with. He has gone above and beyond with this repackaged character and he’s making it work in spades. The match itself was also quite good. It wasn’t a wrestling masterpiece or anything, but it showcased the Fiend exactly as he needed, and the finish with Balor’s attempted coup de grace transitioning right into the Fiend’s mandible claw was excellent. I can’t say enough about how much I enjoyed the whole thing. For me this was easily the moment of the night and probably my favourite match on the show. 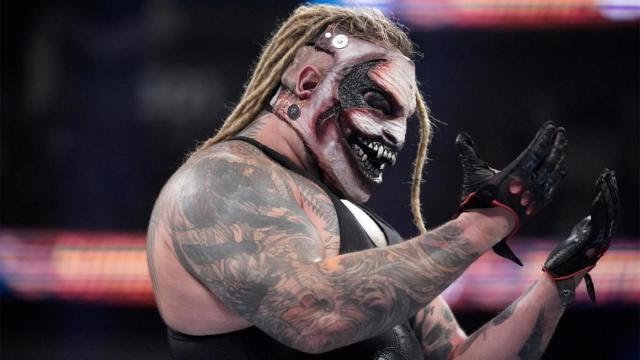 A close second was A.J. Styles vs. a Nightwing-garbed Ricochet for the US title, with the OC at ringside. It would be hard for these two not to have a good match, and this one was no exception. What I loved about this match is that it wasn’t what one would expect from their match, in that it wasn’t a high flying spot fest. This match was far more psychological, with A.J. working over Ricochet’s leg, including using an insane-looking calf crusher, and Ricochet having to compensate for only being able to wrestle on one leg. There were some great moments in this match, such as Ricochet bounding from Anderson’s shoulders to Gallow’s to hit Styles with a hurricanrana on the floor. Ricochet doing a springboard elbow halfway across the ring on only one leg was a sight to behold. The finish was amazing, with Styles catching Ricochet, who was attempting a phoenix slash, and turning it into a styles clash for the win. The OC’s beatdown on Ricochet after the match continued to show that group’s strength and unity. I’m actually interested in Gallows and Anderson for the first time in months, in spite of the unfortunate name of their faction. Overall, this is a match you’ll want to check out if you haven’t seen it already.

A pleasant surprise for me on the show was Brock Lesner vs. Seth Rollins. I expected to hate this match. And there were definitely things I hated about it, but I’ll leave those for later. For now, I’ll stick to what I liked, which was the match itself. A surprise curb stomp about a minute into the match that Lesner kicked out of was a nice start. I liked the way Rollins managed to counter german suplexes by landing on his feet, and how Lesner then transitioned to the F5, or else started to keep his suplexes lower to the ground to stop Rollins from being able to flip out of them. Watching Lesner spin Rollins around holding him off the ground by the tape around Rollins’ ribs was amazing. The lengths to which Rollins had to go for a victory kept Lesner strong, including multiple shots into the ring post, and a splash through the Spanish (of course) announce table. I enjoyed the match itself, and I think it’s worth checking out.

The Bad, or Get What You Expect

Let’s move to what I didn’t like about the Rollins-Lesner match, most of which revolves around Seth Rollins. I once was a pretty big fan of Rollins. I liked him on NXT when he became the first ever NXT champion. I liked him in the Shield. I liked his heel turn when he turned on Ambrose and Reigns and sucked up to Triple H. But somewhere after that, things changed. Whenever he plays the good guy now, he comes across as a little too cocky, and little too disingenuous. And that showed in spades with the build up to and finish of the Summerslam match. Brock gave him some serious beatdowns on Raw. After the one on the go home show before Summerslam, Rollins gave an impassioned speech about wrestling being all he’s wanted and all he’s got, and promised to beat Lesner at Summerslam. The crowd reaction said it all. They simply didn’t care. I went back and watched it. I didn’t care either. And then Rollins actually cried when he won the title at Summerslam. Now don’t get me wrong, I have no problem with someone crying when they achieve their dreams, but Rollins had this title before. He’s beat Brock before at Wrestlemania. This victory was nothing new. So why was he crying? It seems like a ploy in a desperate attempt to get the crowd to love him. For me, it fell completely flat. I don’t care about Seth Rollins. I don’t care that he’s champion, and I don’t think that I’m alone. As champ, he’s supposed to matter to all of us. He doesn’t.

I want to take a moment to tell you all about something else I learned about Seth Rollins on Sunday. I’ve been very critical of his ability to sell in the ring for a long time now. Sunday was no different. The guy takes two serious beatdowns from Lesner for two weeks, and can barely leave the arena under his own power on Raw. But low and behold, in spite of taped ribs, he’s completely capable of having a full match with Lesner, including doing a splash through a table. What’s the main body part that hits the opponent with a splash? If you said chest and ribs, you win a prize to be determined later. And yet, Seth gets up just fine and manages to beat Lesner. There was almost no sign of any struggle with injuries at all. And that’s when it dawned on me. Seth has Wolverine’s healing factor! The reason he never sells in the ring is because he regenerates from all those injuries almost instantly, just like Wolverine! Now that I’ve figured that out, I can safely watch a Rollins match and fully understand why he’s hands down one of the worst sellers in the business today, whining after a Lesner beatdown notwithstanding. You don’t need to sell if nothing can actually injure you! We had a superhero in WWE and I never even realized it until now. 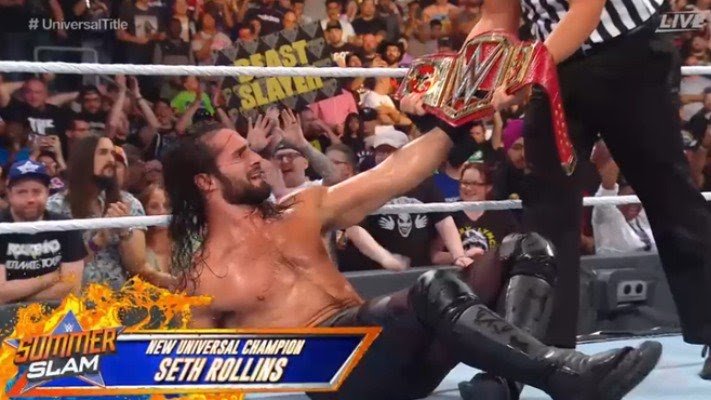 Speaking of beatdowns, let’s turn to the Summerslam match between Dolph Ziggler and Goldberg. I hated this match, but then again I’ve never liked Goldberg even at the height of his popularity in WCW. I don’t like big, indestructible wrestlers without an appropriate persona, and big football dude that smacks his head on lockers and yells a lot is not it. He’s got three moves. He injured Bret Hart. That match earlier this year in Saudi Arabia that actually embarrassed the Undertaker… There’s so many reasons why Goldberg is terrible. And his match Sunday was just one more. It was basic Goldberg. Kick out of stuff at one, spear, jackhammer, three count. Yawn. But that’s not all! He had to come back two more times because Ziggler refused to stay down. Spear! Spear! Spear! Whoopee. I have to give kudos to Dolph. He did exactly what was needed of him in this kind of match. He played total stooge to Goldberg, and he did it very well. He sold like a champ. However, he deserves so much more than this, like maybe a real story, a new character, anything but being squashed by Goldberg. I understand this kind of match appeals to a lot of people. My brother-in-law loved this match, but he loves everything Vince McMahon feeds him. I wish Goldberg would go away, but sadly I have a bad feeling he’ll be around for some time to come.

This brings me to the Kofi and Randy Orton match. I was actually looking forward to this one. The build up was great. This was a feud ten years in the making, and I was pleasantly surprised by how they integrated references to their former confrontations into the current story. They even used the moment when Orton called Kofi stupid when a sequence was botched during one of their matches years ago. However, in spite of the amazing build, the Summerslam match completely failed to deliver. It was slow and plodding, typical of so many Orton matches. The ending was truly atrocious. Orton hit an RKO, but Kofi managed to roll out of the ring. Orton took that moment to taunt Kofi’s family at ringside. Kofi attacks him briefly and suddenly the bell rings. A double count out. Let that sink in for a moment. A double count out at a championship match at Summerslam. And it’s not like they had this massive brawl where both would be so distracted they’d never notice the count. This was a small fight at best. The crowd got it right when they chanted “bulls***”. This was utter and very disappointing garbage. Kofi beating Orton with a kendo stick after the match did nothing to save it. Also, the WWE needs to stop using the kendo stick assault as a way to get crowds not to hate something. It’s getting tired, but that’s another story.

So those were the highlights and lowlights of Summerslam this year. Overall, I enjoyed myself watching it. There was enough good to keep me entertained, and I’m glad I saw it. It wasn’t on the level of an AEW show or Wrestle Kingdom, but it was worth watching. I’d give the show a solid 6.5/10.